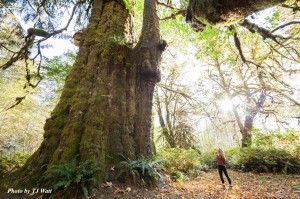 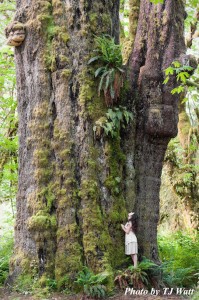 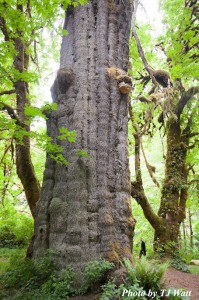 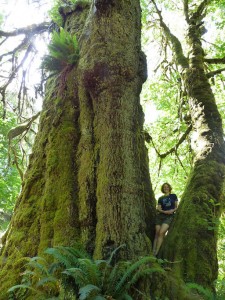 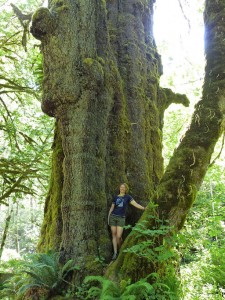 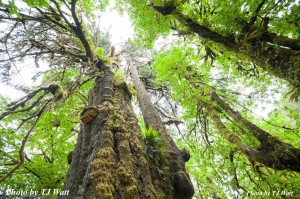 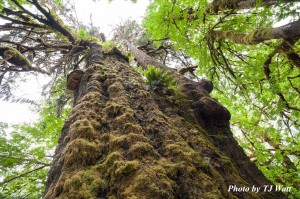 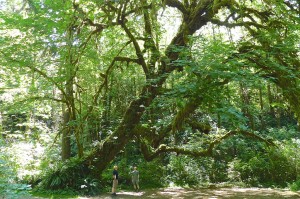 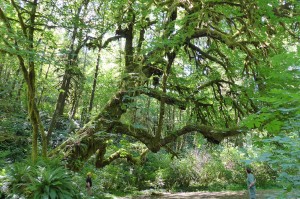 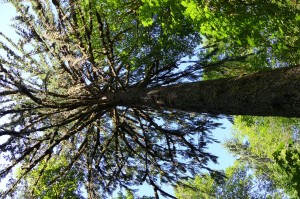 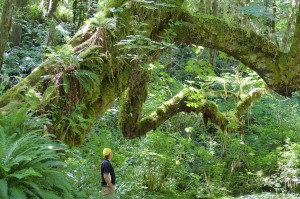 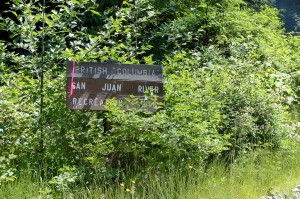 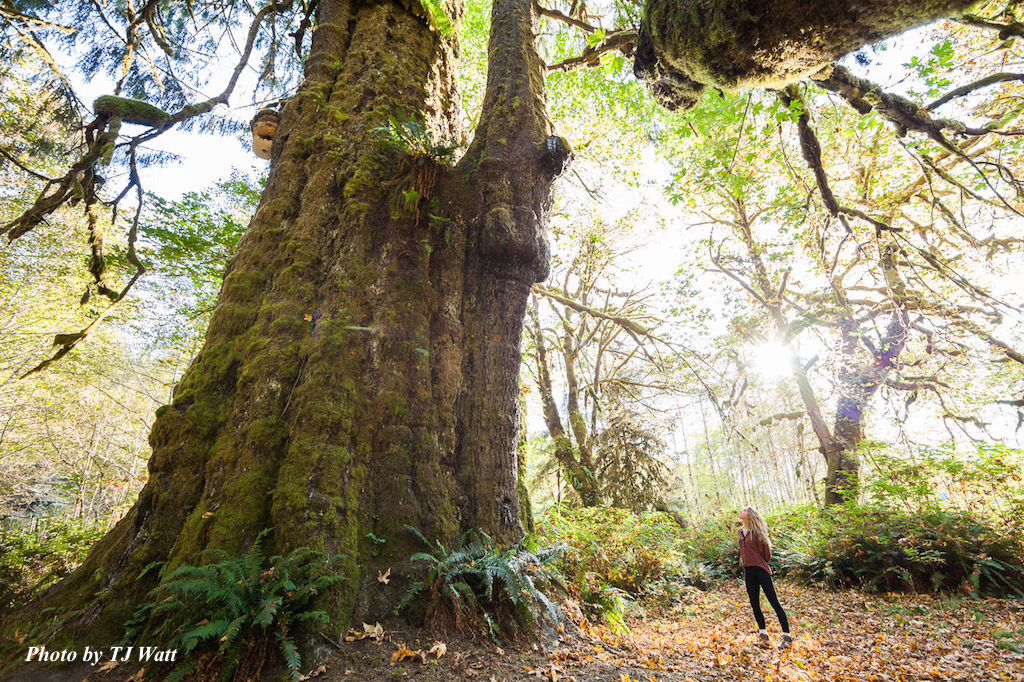 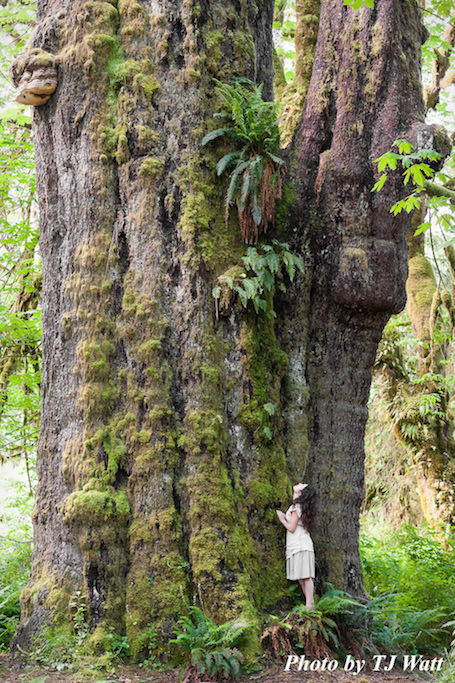 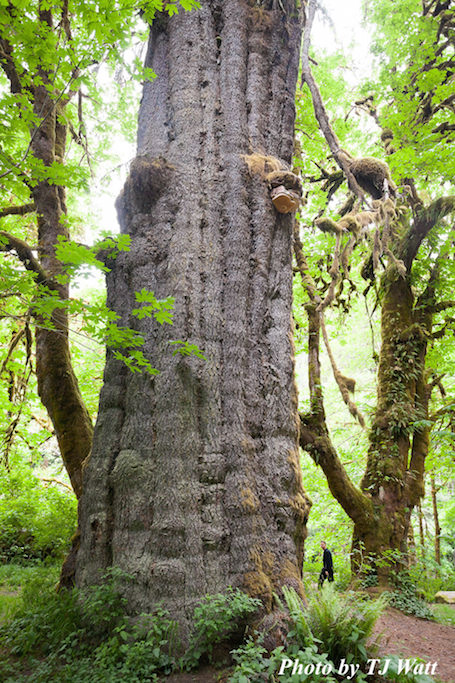 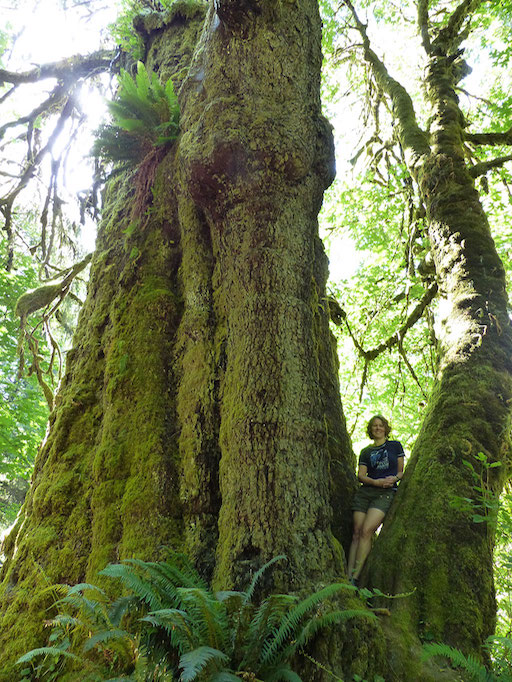 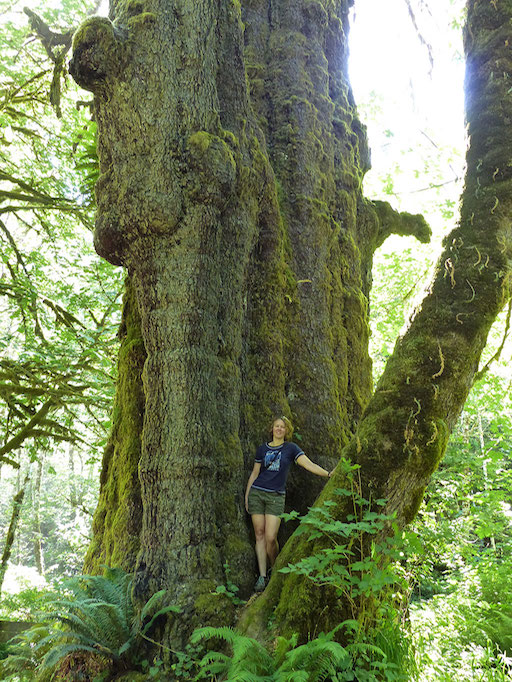 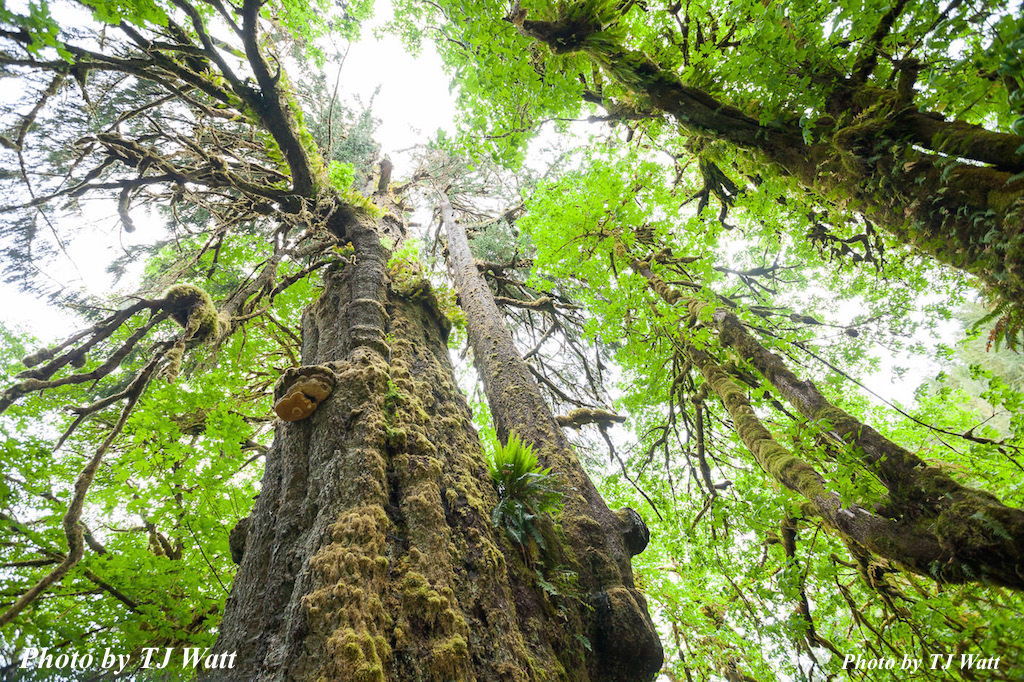 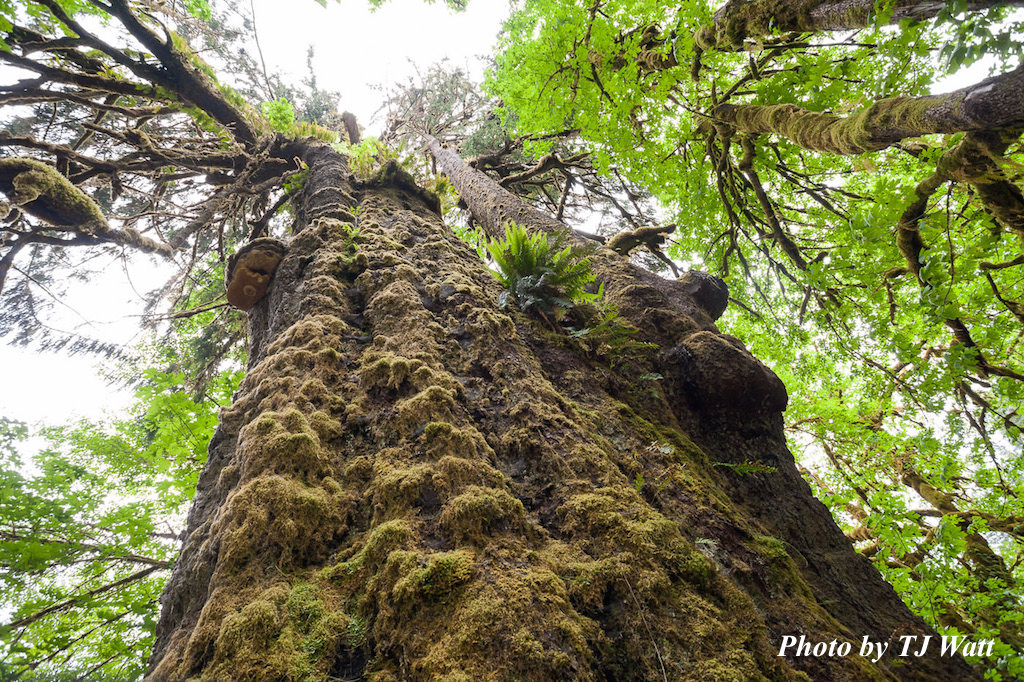 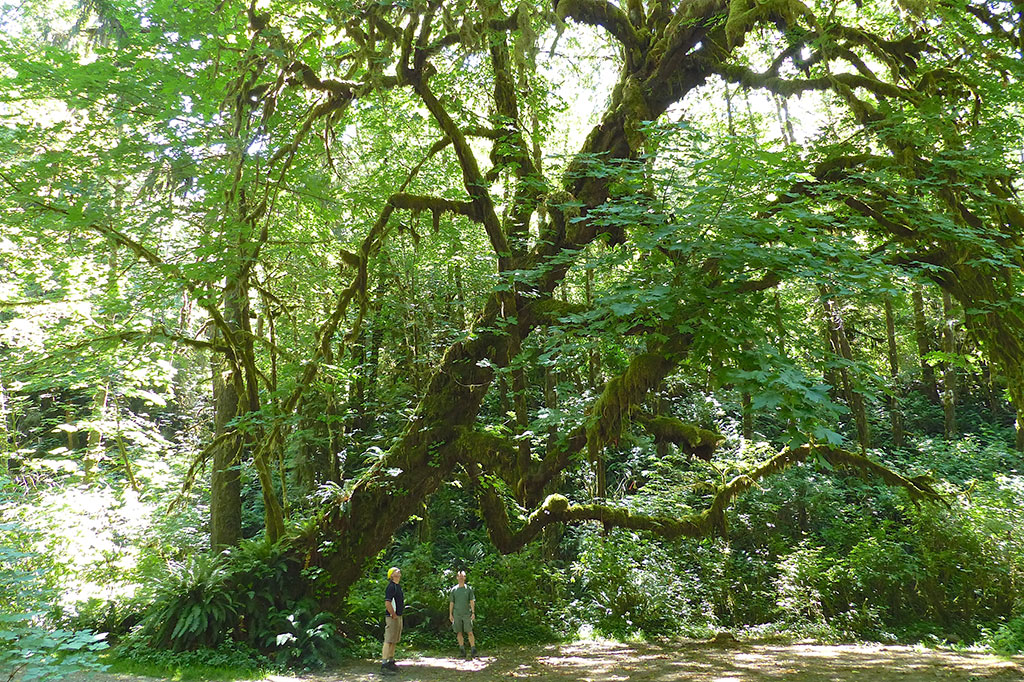 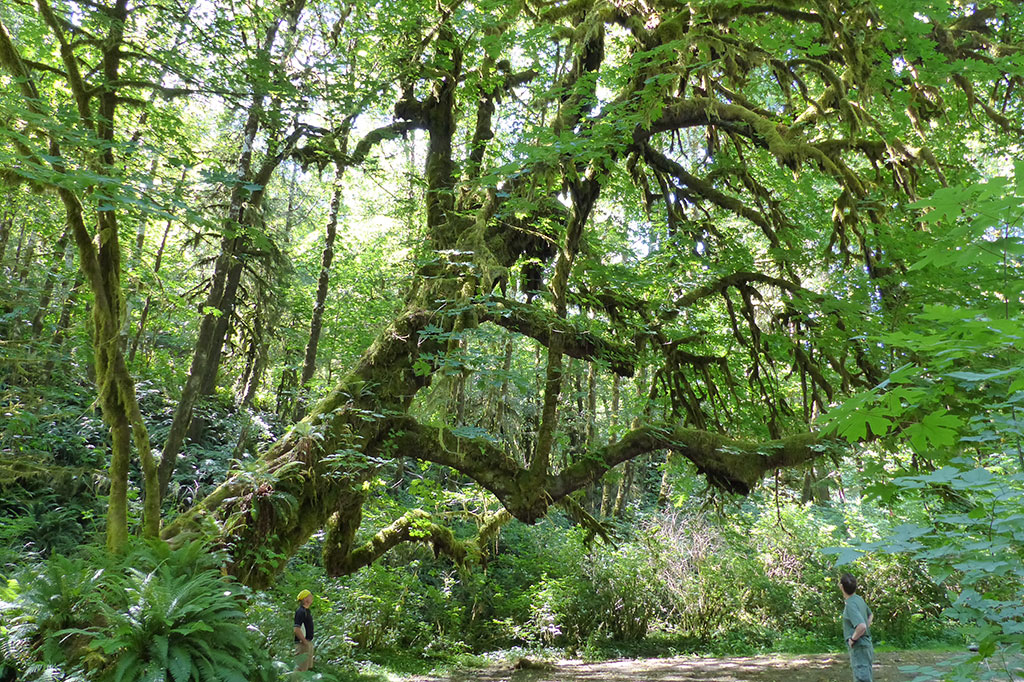 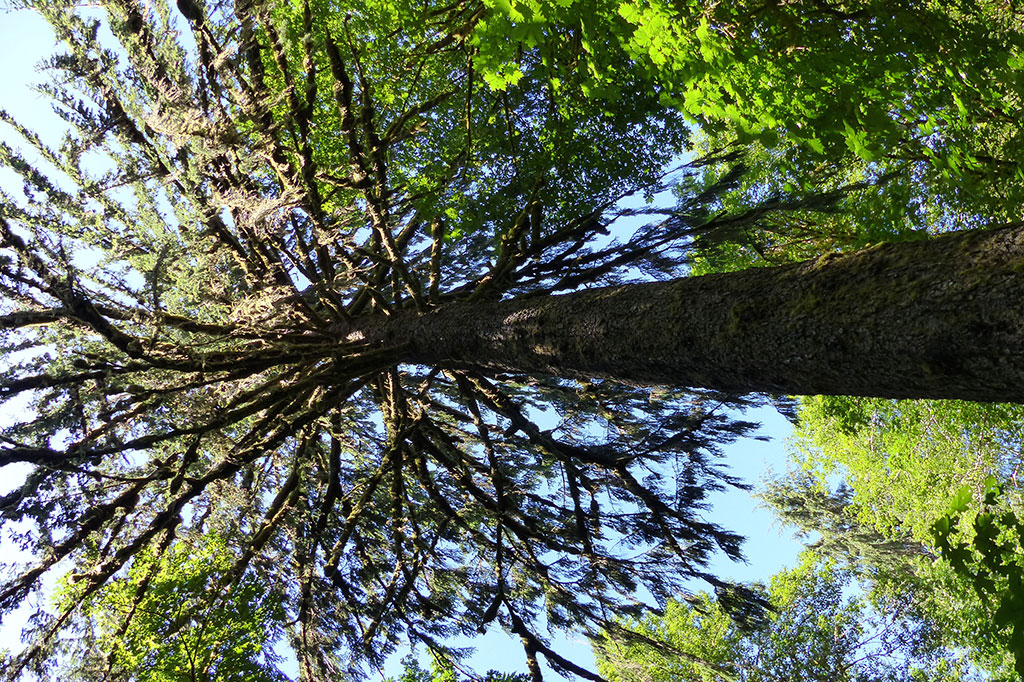 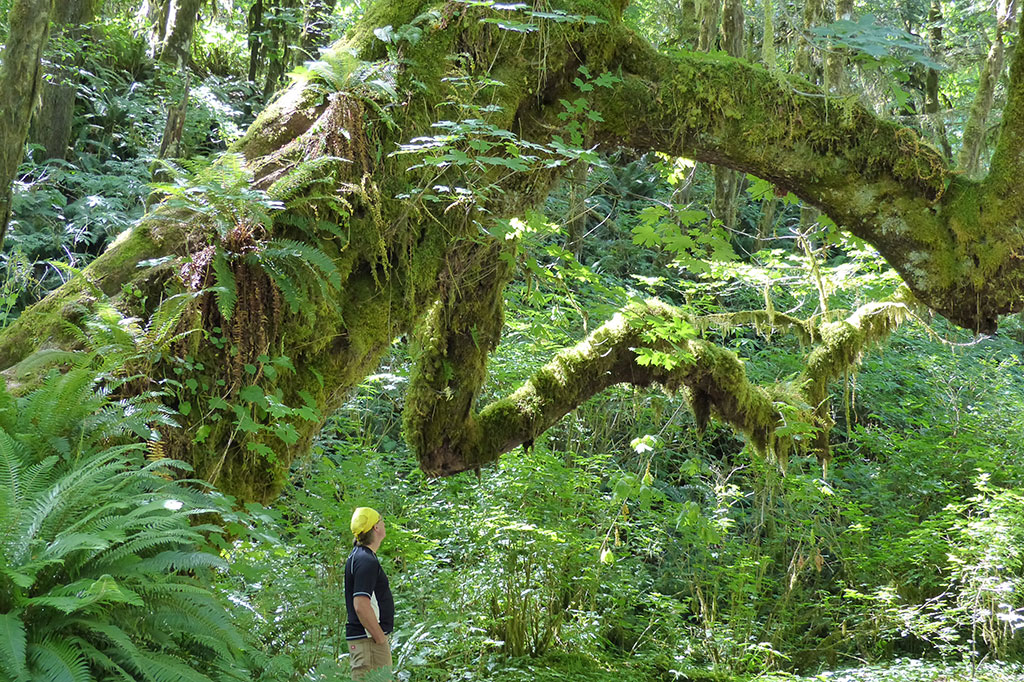 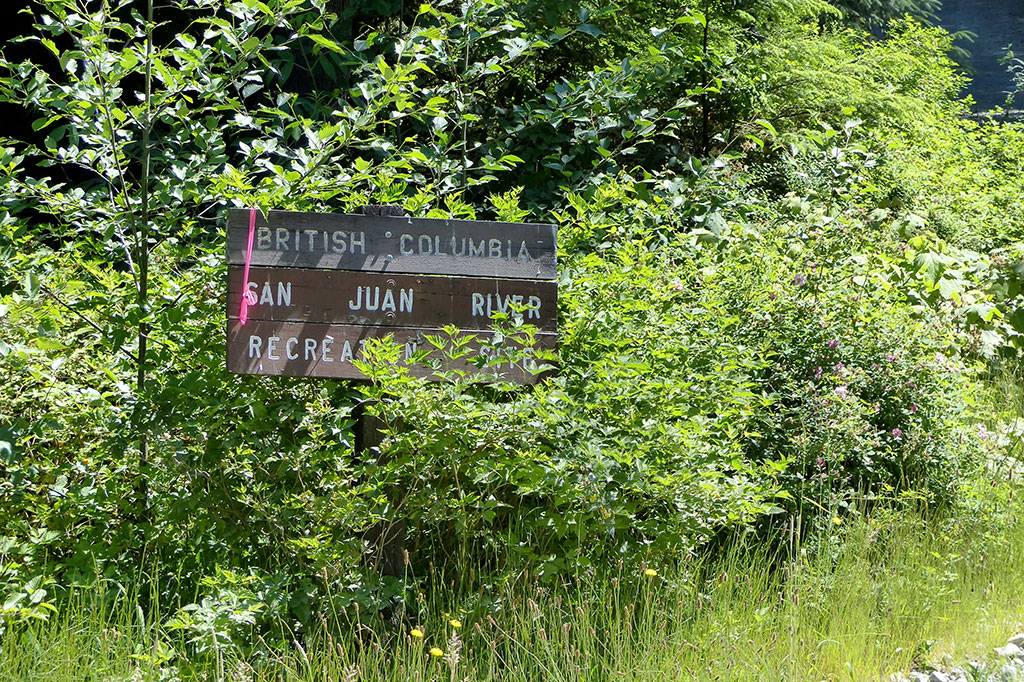 Size and Location:  The San Juan Sitka Spruce resides next to a bridge about 20 km up the San Juan River east from Renfrew. This massive building-sized tree is Canada’s largest spruce tree when measured by wood volume (333 cubic meters).  You can see the 62.5 meter top of it from the bridge as you cross the river. It is in an area where other large Sitka spruce can be seen poking up like islands in the sea of second growth around them. As you turn left at the end of the bridge and descend down to the San Juan River Bridge Forestry Recreation Site, the full 3.71 meter diameter of the champion spruce comes into view.
The San Juan Spruce is all out of proportion compared to what one normally thinks of as a typical tree. It would take several adults holding hands to circle the 11.6 metre circumference base. At first the visitor will be struck by the sheer size of the giant, but after a while may also come to appreciate its interesting architecture. It has a complicated canopy, including a side trunk that is a large tree in its own right. The San Juan Spruce is much more than just a tree.  It is an entire vertical community of rain forest life. A large bracket fungus graces its lower trunk, and ferns grow in splashes of fluorescent green everywhere on the trunk and in the canopy.  Forest debris builds up thickly on branches supporting a variety of spongy mosses, and even other trees.
From Port Renfrew take Deering Road to Harris Creek Main. Turn right toward Cowichan Lake on the Pacific Marine Circle Route until the Y intersection. Go to your right at the Y. Watch for signs that will lead you to San Juan Bridge Recreation Site. It is a small, rustic 6 unit campground next to the San Juan River, on your left.
Bear and Cougars:
Remember this is bear and cougar country so please take the usual wildlife precautions.
Safety:
Direction to Sitka Spruce