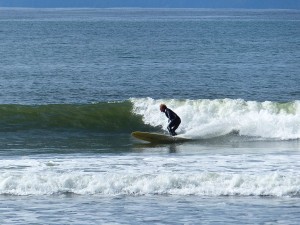 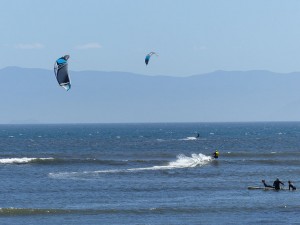 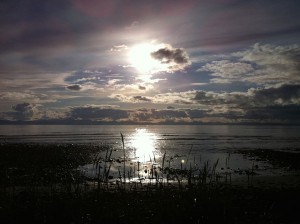 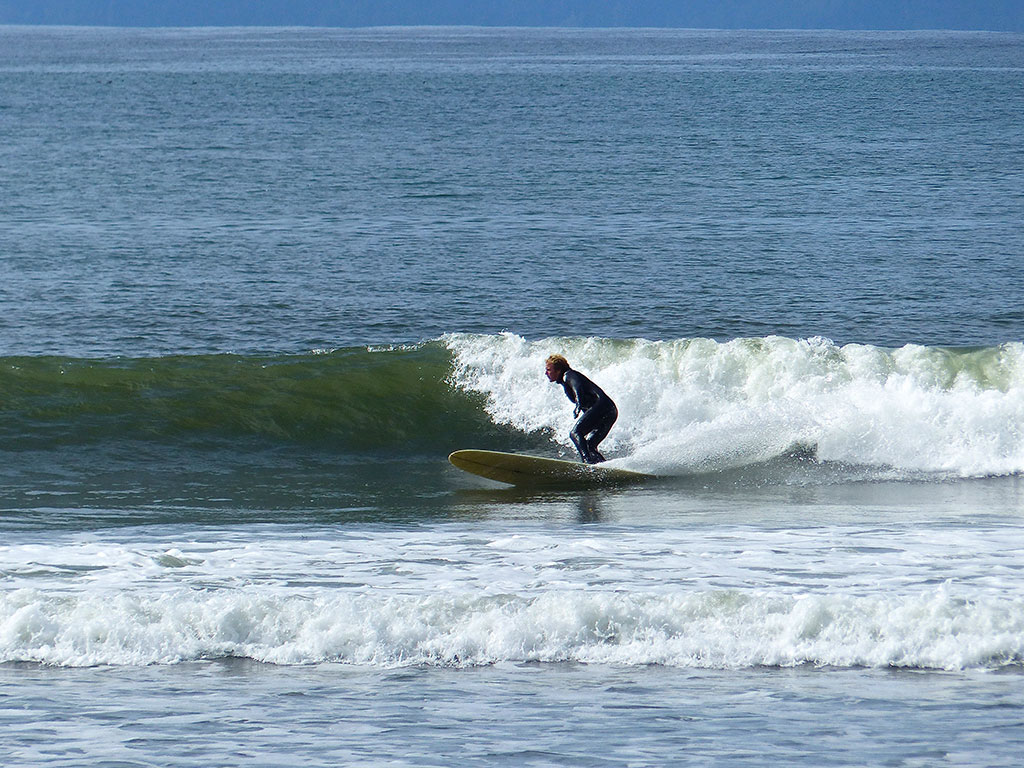 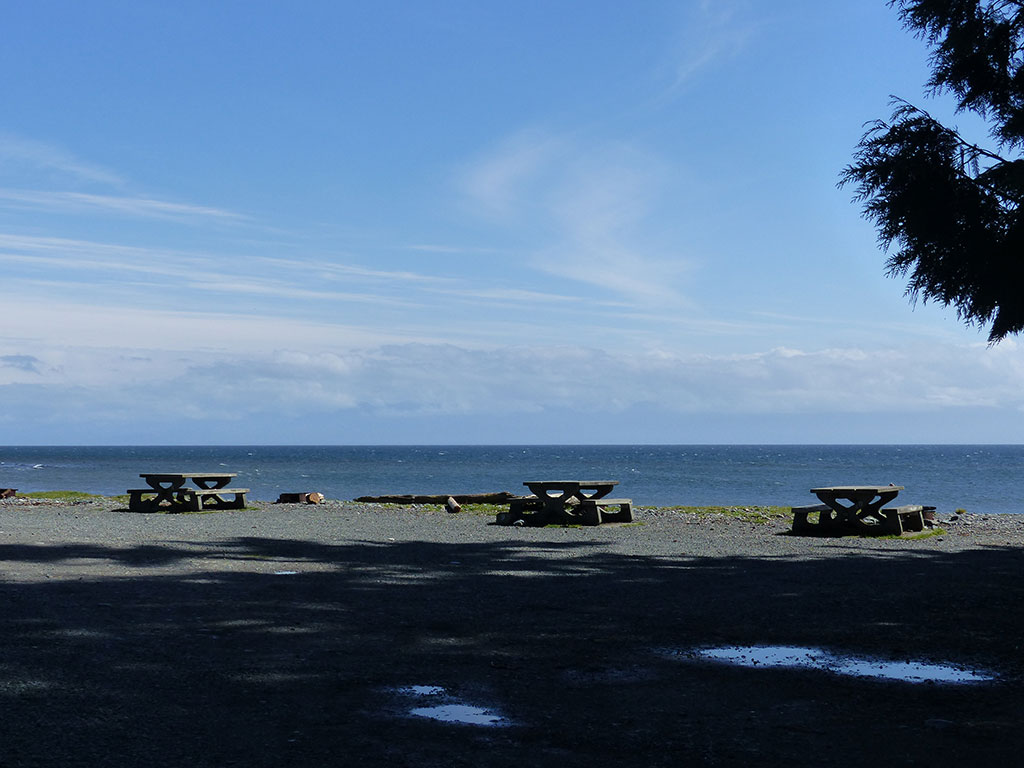 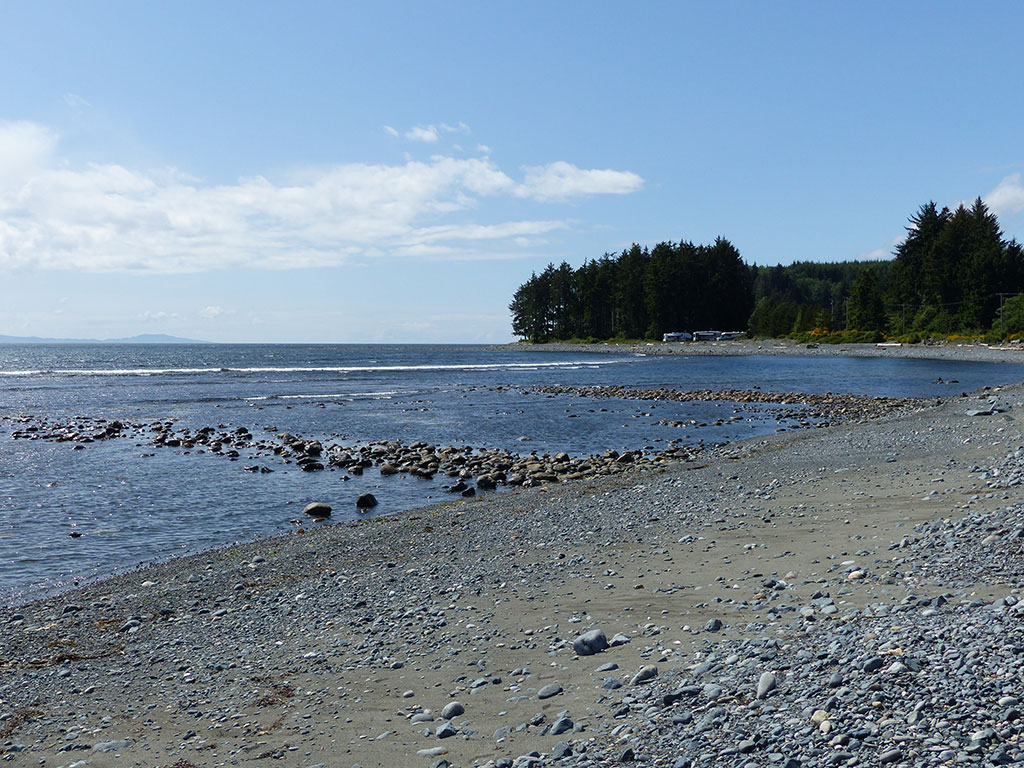 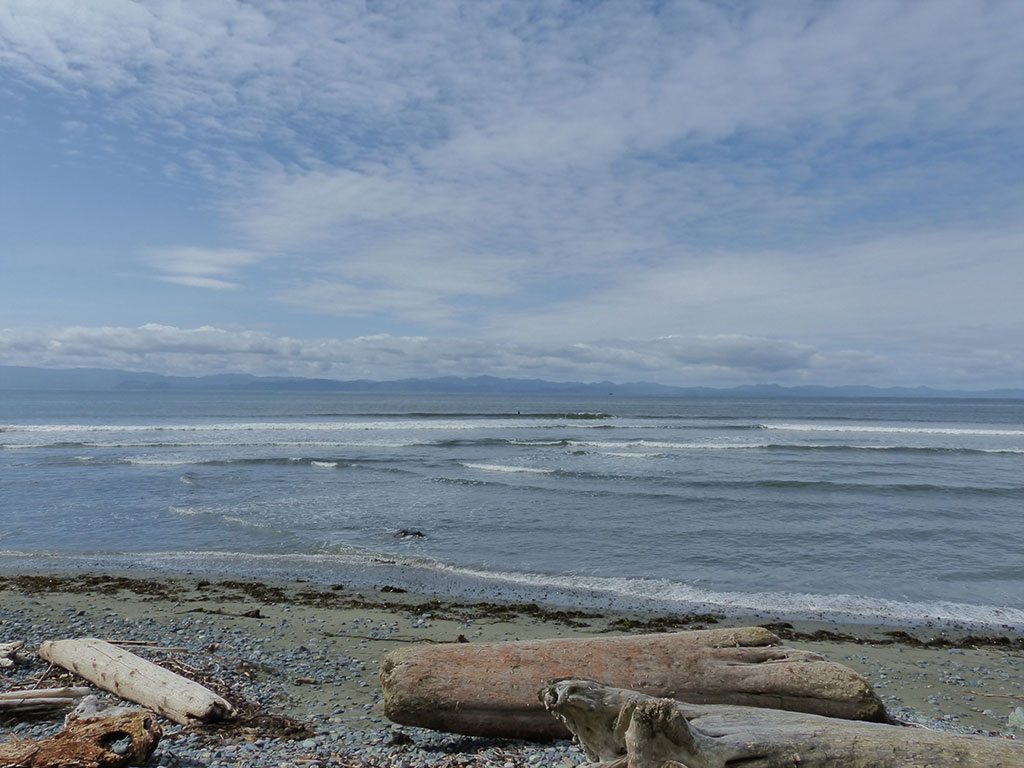 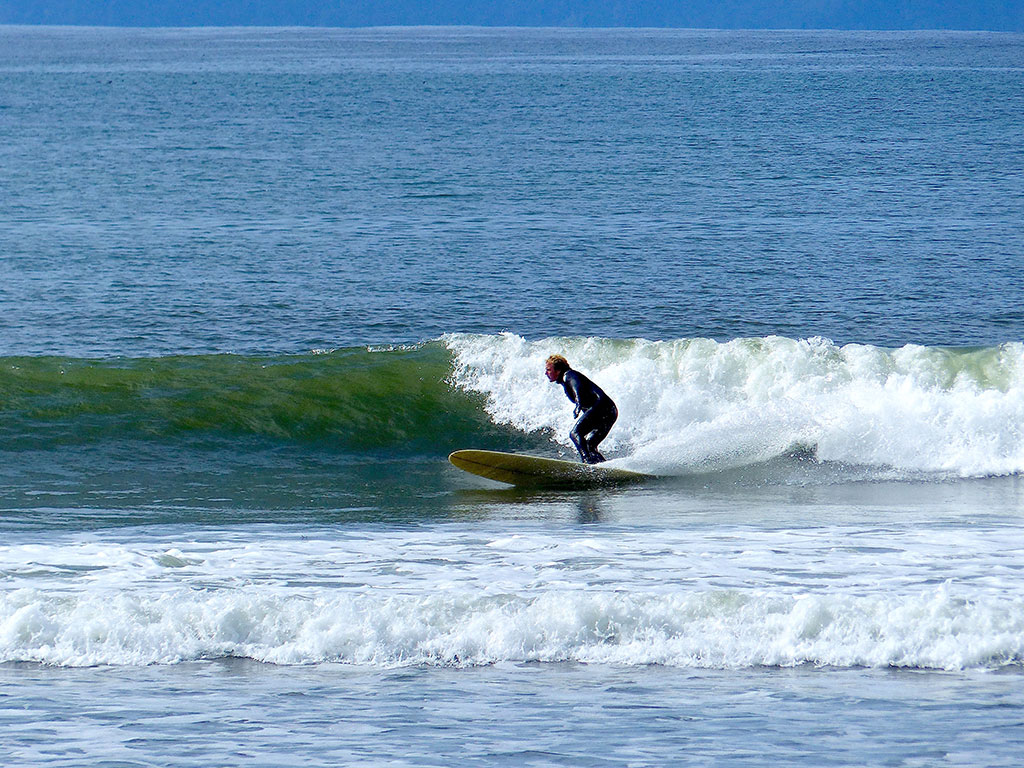 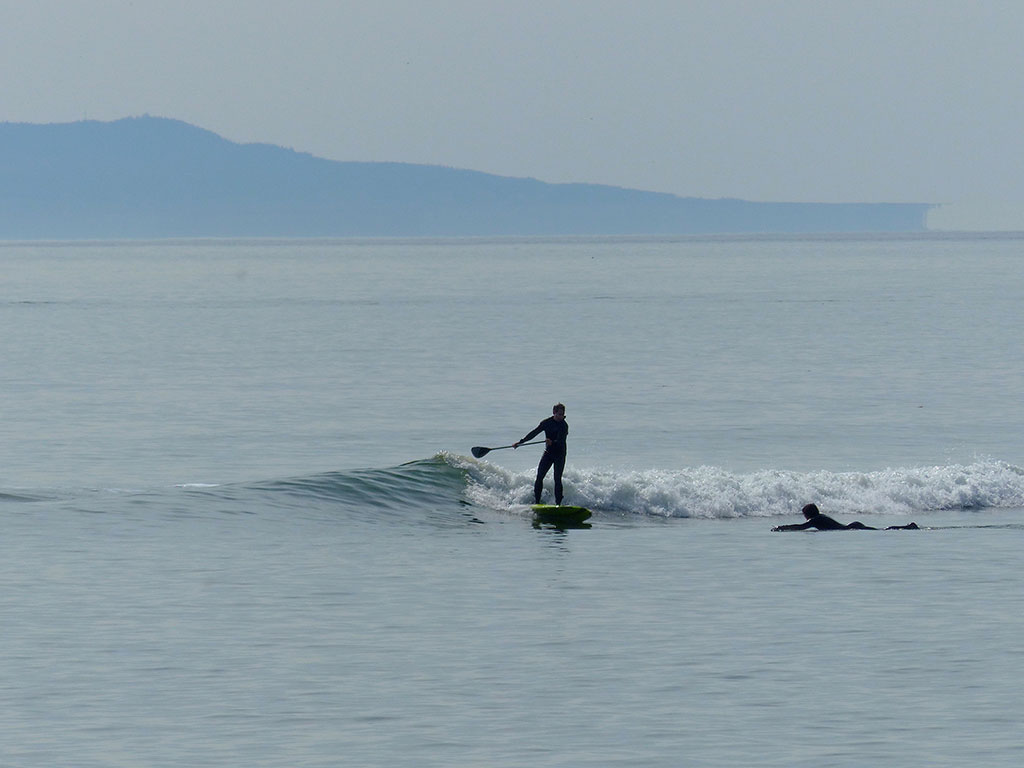 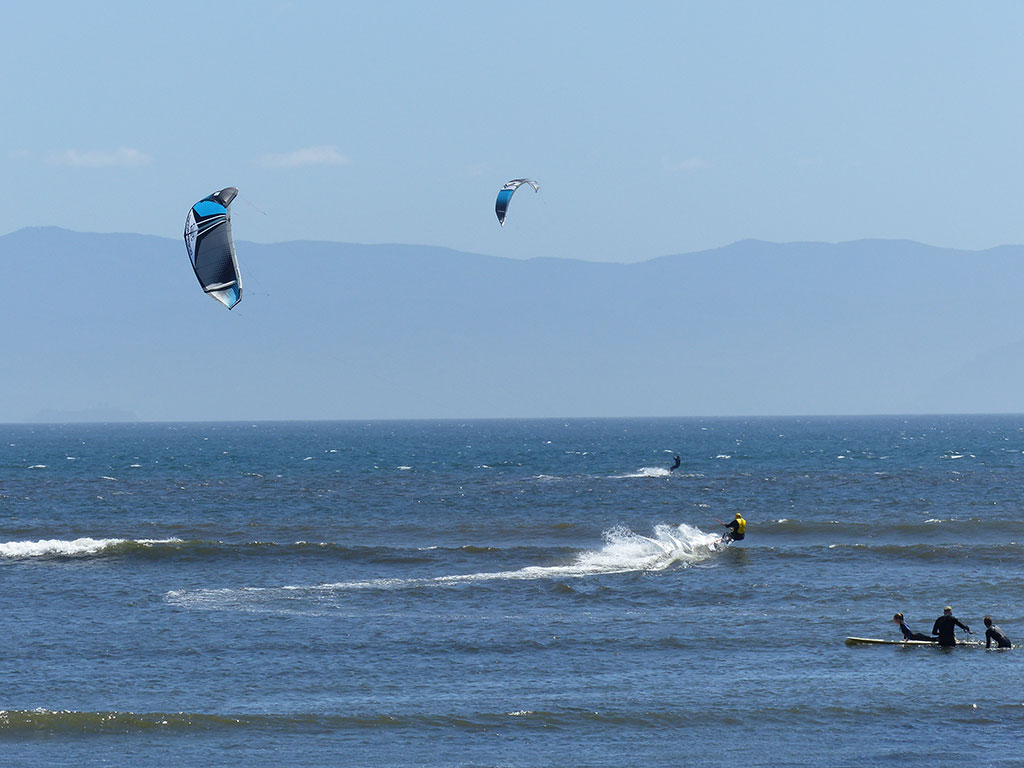 The tiny logging community of Jordan River offers a terrific views of the open Pacific Ocean. Highway 14 makes its only approach to the ocean here before beginning to climb the San Juan Ridge once more.

There is a convenient picnic park and a small campsite for overnight visitors at Jordan River (or River Jordan, as shown on some maps). The camping is designed partly for RVs,  facing the water. Each campsite has a picnic table and fire pit. You’ll also find tent camping areas as well. Outdoor toilets are nearby but there’s no hook up for water and electricity. Plan well. French Beach Provincial Park has septic emptying facilities.

Surfing on Vancouver Island is a dicey proposition at the best of times. Inconsistent wave conditions, big weather, bone-rattling water temperatures, and poor access all conspire to ensure that a summer safari to the real West Coast is a bruising experience.

In winter, the climatic environment intensifies, and wave riding is best left to addicts, fools, and cryogenic researchers. Although the epicentre of surfing on Vancouver Island is in Tofino, there is a hard-core clique of riders centered in Jordan River. Storms originating in the Gulf of Alaska generate most of the tastier surf that lashes British Columbia’s coast from late September through March. Other swells come from Japan and more localized weather systems. This is in marked contrast to the summer, when distant Southern Hemisphere swells have a minimal effect blocked entirely from the southernmost areas of Vancouver Island by Washington’s Olympic Peninsula.

At first glance the ocean around Jordan River in winter looks grey and barren. The surprise, once you get out into it, is how alive it actually is. Seals pop up in the kelp beds to check your style, while black cormorants cruise around outside the takeoff zone. Waves average 2- to 4-foot sets of rights that break off the point, but could hit as high as 10ft.  When it’s cold and raining, with the water temperature in single celsius digits and a sky growing darker as the day wears on, you may well have the swells to yourself.

The ideal board for British Columbia conditions is slightly longer (in the 7-feet-6-inches range) and wider than normal, and with three fins, which makes catching and controlling waves easier in less-than-optimum conditions.

Cold Shoulder Cafe, & Far Out Pizza are within walking distance from the beach, is a great place to have fresh home baked goodies, tasty daily special meals and locally roasted coffee beans.

Bear and Cougars
Remember this is bear and cougar country so please take the usual wildlife precautions.
Safety: